When it comes to buying makeup, I try very hard to make informed decisions on what I choose. Because of this, I end up really liking a vast majority of the products I purchase. However, the research I do doesn’t work in my favour, and I end up with some lemons. What is a lemon, you ask? Lemons are basically duds – things that I consider unsatisfactory, disappointing, “flops”. With the majority of my reviews on this blog being mostly positive, I thought it would be a wonderful idea to dedicate a segment for the products that just didn’t really cut it for me. If you would like to learn more about some of the lemons in my collection, please keep reading. 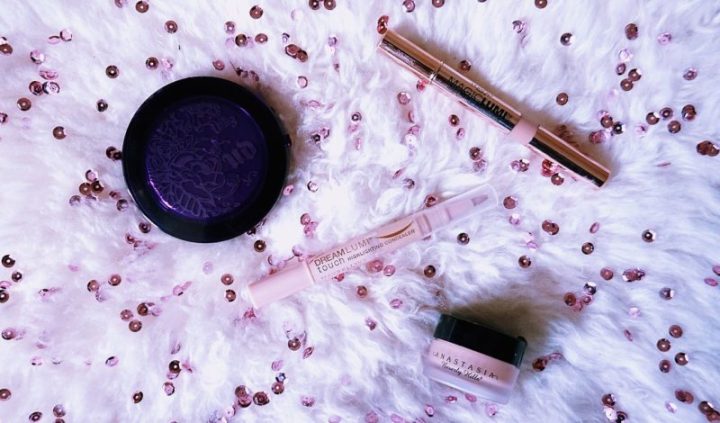 I received a sample of the YSL Touche Eclat Highlighting Pen and I fell in love. However, I was not so crazy about the price. I took it upon myself to find a drugstore dupe so I could take it easy on my wallet, which wasn’t really an easy feat given my deeper skin tone. My first thought went to the Maybelline Dream Lumi Touch Highlighting Concealer, however it didn’t come in a shade dark enough for me to use. Then I stumbled upon this little guy and decided to give it a try. Firstly, I will admit that I definitely jumped the gun on this product since I desperately needed a concealer that would match my freshly tanned skin, and since I was already in the drugstore, I just bought. The first thing that ticked me off about this product was its price. I got it at Shoppers Drug Mart for about $18 CAD, which is absolutely ridiculous considering the amount of product that comes with it (0.05 oz). Alas, I was willing to put that aside because ultimately $18 CAD is still less than half the price of the YSL concealer. After trying the product out, I was even more bitter. The shade was horrible – it had a red/greyish tint to it, making my under eyes look awful and more zombified than highlighted. The formula was somewhat thick, difficult to blend, and had zero coverage. It’s times like these where I wish I could just return drugstore products even after opening them, especially when they’re not even that affordable.

This product is an interesting one given that I don’t necessarily hate its formulation – just bitter that I went against the advice I gave myself earlier on (i.e. this didn’t come in a shade that suited me). I first bought it many years ago in the shade “Radiant” to use as a colour corrector/highlighting concealer, and I liked it quite a bit. It is hydrating and blends very nicely into the skin. It has a gel/cream formula that feels very lightweight. This time around, I decided to buy a different shade to use just as a lightweight concealer, so I picked up the shade Nude. Unfortunately, this shade wasn’t so forgiving on me as “Radiant” was. This particular shade is way too light for my skin and it also looks too ashy. I can’t even salvage it by mixing it in with a darker concealer because it just makes it look too neutral.

As I mentioned above, I thought this could’ve been an affordable candidate to the YSL Touche Eclat Highlighting Pen, however the shade was way off, and I could have just saved money if I just bought the YSL version out right. Now I’m stuck with two crappy concealers that I can’t use, but lesson learned!

The third and final concealer mentioned in this post! Maybe this is a sign that I’m just far too picky with concealers and I should stick to what I know and love. I gave this product the benefit of the doubt because Anastasia Beverly Hills is generally a brand I am consistently impressed with. Most, if not all, of the products that I’ve purchased from ABH have been winners in my books, so I thought that maybe their concealers would work for me. After all, the price point was great (about $25 CAD) and I thought that since they had such a wide colour range, I would have no problem in finding a shade for myself. I chose the shade 3.5, which is described as “warm; ideal for tan skin with yellow undertones” on the Sephora website. Before I get into why I dislike this product, please take a look at the claims made for this product:

Instantly camouflage dark undereye circles, hyperpigmentation, and blemishes. The hydrating cream formula glides over skin without caking. It prevents setting into fine lines, stays put until you remove it, and it can easily be worn all over as a foundation. The result is skin that appears smooth, natural, and flawless.

With all that said, unfortunately I feel as if this concealer does the exact opposite of everything it claims to do. It is not full coverage – more of a medium coverage. It seems hydrating at first, however it is not very easy to blend and it looks slightly drying once it is completely blended out. It makes the under eye area look quite crepey, and it creases even after setting it with powder. Overall, it just didn’t give me a good look. Furthermore, I find that the shade descriptions are completely inaccurate. 3.5 is much lighter than what I would consider appropriate for “tan skin with yellow undertones”. In hindsight, maybe I could have tried the shade 3.75 instead, which is described as “warm; ideal for tan skin with golden undertones”, but I’m not willing to give this product a second chance. 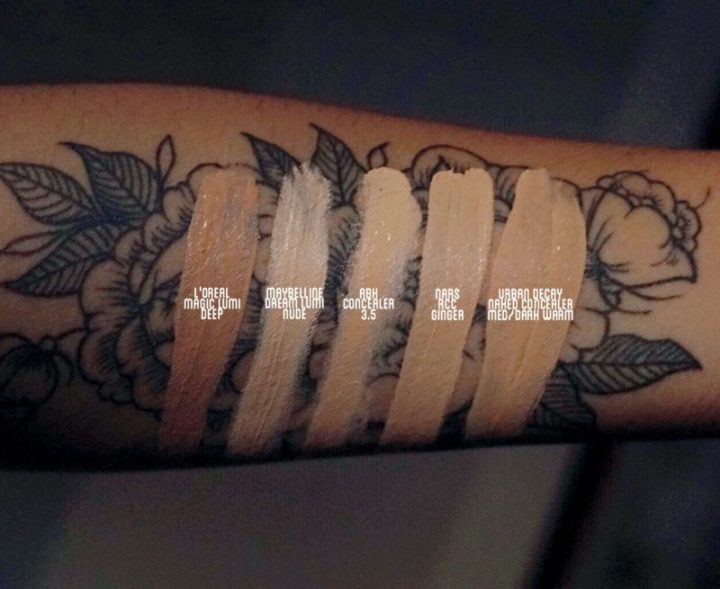 Swatches of L’Oreal Magic Lumi in Deep vs Maybelline Dream Lumi in Nude vs. ABH Concealer in 3.5 vs. NARS Radiant Cream Concealer in Ginger vs. Urban Decay Naked Concealer in Medium Dark Warm on NC42 skin

I had such high hopes for this product after reading so many great reviews. I thought it would finally put an end to my search for a powder that actually keeps me shine-free and flawless throughout the day, but I was wrong. So. Very. Wrong. It is probably one of the worst powders I’ve used thus far. It made my skin look so dry and texturized, emphasizing all the pores and lines on my face. It also did not touch up well, making my face look even more haggard as the day goes. I was also under the impression that this product, despite having a white/pale lavender tone, would not give me a white cast after reading multiple rave reviews from darker-skinned individuals who attested to this claim. I don’t know if the formulation has changed since those were written, but it is not appropriate for anyone with a tan. It gave me a raging white cast and made me look ghastly. Bottom line, I am extremely disappointed with this product and I would absolutely never recommend it.

Do you have any “lemons” in your collection?

Have you tried any of the products I mentioned in this post, yet feel differently about them?

Let me know in the comments below!