Everyone has a weakness. For Achilles, it was his heel. For Superman, it was kryptonite. And for me? NARS blushes. I can’t get enough of them, and just when I thought that my collection was complete, NARS decided to release this beautiful thing. The arrangement of shades in this specific palette reeled me in, and I knew I had to have it. One thing that made me hesitate was the fact that it was limited edition. Because of this, I questioned whether the quality would be on par with the regular NARS blushes. Did this palette impress, or are you better off skipping this release? Keeping reading to find out. 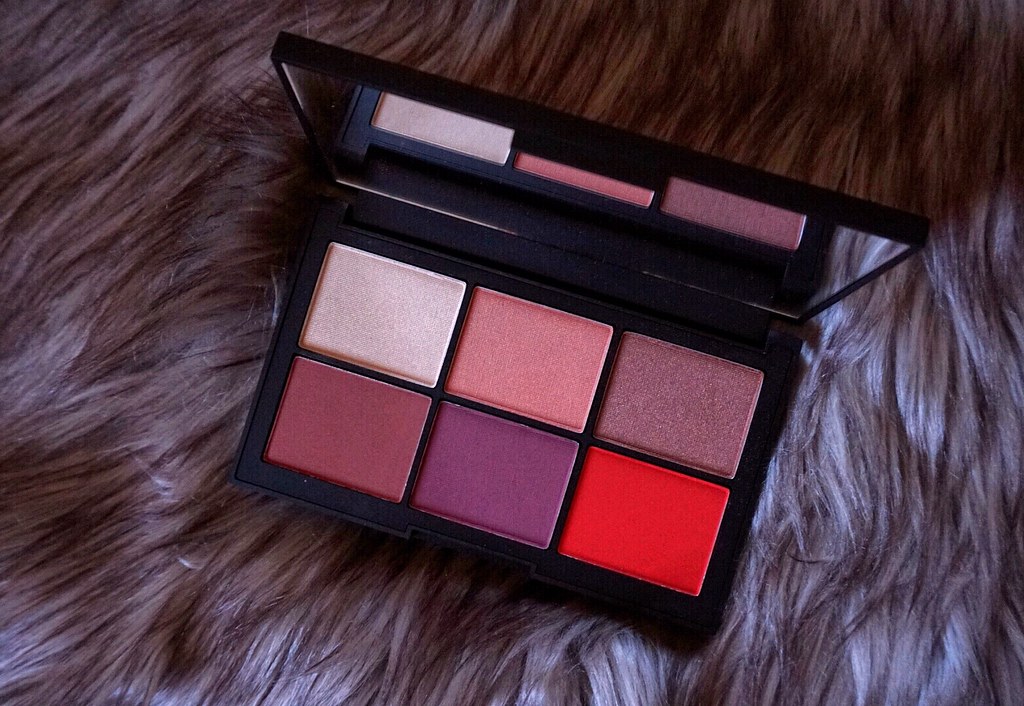 The NARS Unfiltered I Cheek Palette is a limited edition product that retails for $76 CAD. I purchased mine from Sephora, however I’m not sure whether it’s also sold in other department stores which also carry NARS. The palette comes with 6 blushes, all containing 0.12 oz of product. To compare, regular NARS blushes come with 0.16 oz of product for $38 CAD. There is also another NARS cheek palette, the Unfiltered II, which is a a cooler-toned, lighter version. 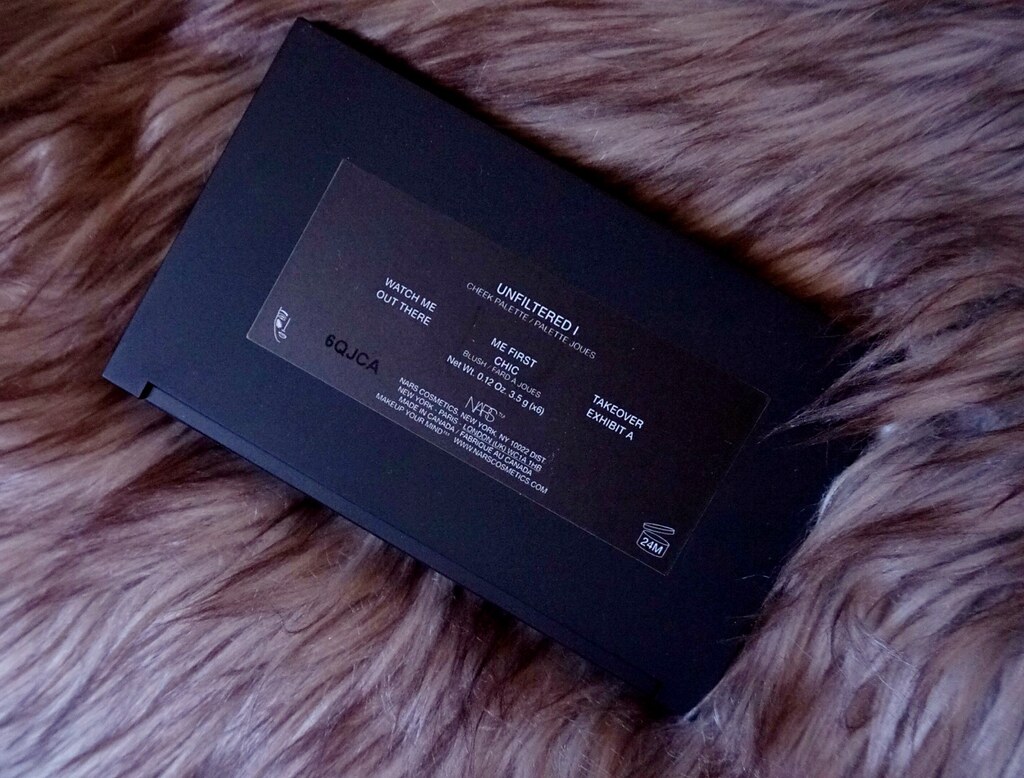 The Unfilitered I palette has three shimmer shades (Watch Me, Me First, Takeover) and three matte shades (Out There, Chic, Exhibit A). As far as I know, all of the blushes are exclusive to this palette with the exception of Exhibit A, which is part of the permanent NARS blush collection.

‘Watch Me’ is the only blush in the palette which I would consider to be more of a highlighter. It is described as an “opalescent gold sheen”, which is exactly what it is. The formula is quite smooth and consistent with the regular NARS powder blush formulas. It’s subtle and understated, but gives a beautiful glow.

‘Me First’ is the shade that I am the most disappointed with. Firstly, it looks nothing like what is advertised. In the pictured I’ve seen online for the Unfiltered I palette, this shade looks very vibrantly peachy, however in person it is much more muted. It is described as an “apricot sheen”, which I would say is pretty accurate. It is not particularly pigmented and it is very shimmery. It’s a pretty blush, however it just wasn’t what I was expecting it to be.

‘Takeover’ is described as a “copper rose sheen”. I don’t think this is the best descriptor for this shade. In my opinion, it’s not warm enough to be described as a coppery shade. It’s more like a slightly warm taupe with a lot of shimmer. It reminds me a bit of Warm Soul by MAC, except darker and a little more muted. Honestly, I’m a little undecided about how I feel about this blush. Its formula is very nice and it has great pigmentation, however I just don’t know how I feel about the shade on myself.

‘Out There’ is my favourite blush from this palette. It is described as a “deep russet matte”, which I would say is pretty accurate. It is quite pigmented but has an extremely smooth and buttery texture. It blends out easily on the skin and it has a very velvety look and feel to it.

‘Chic’ is described as a “rich raspberry matte”. The shade looks very nice in the pan, however it didn’t translate well on the skin. It is not as pigmented as ‘Out There’ nor is it as smooth, but it does have good colour pay-off. I don’t think this would be the type of shade you would want to be extremely pigmented because of how bold it is. Despite its firmer texture, it blends out quite easily.

‘Exhibit A’ is described as a “red matte”, and that’s certainly what it is. It’s very bright, almost orangey, and very bold. It is quite pigmented, but I found it to be a bit powdery. I also didn’t think it blended out very easily. This is definitely a blush you want to be careful with, because you can apply too much and may have a difficult time making it look more diffused and natural. With that said, I would imagine that this would look absolutely stunning on deeper complexions. 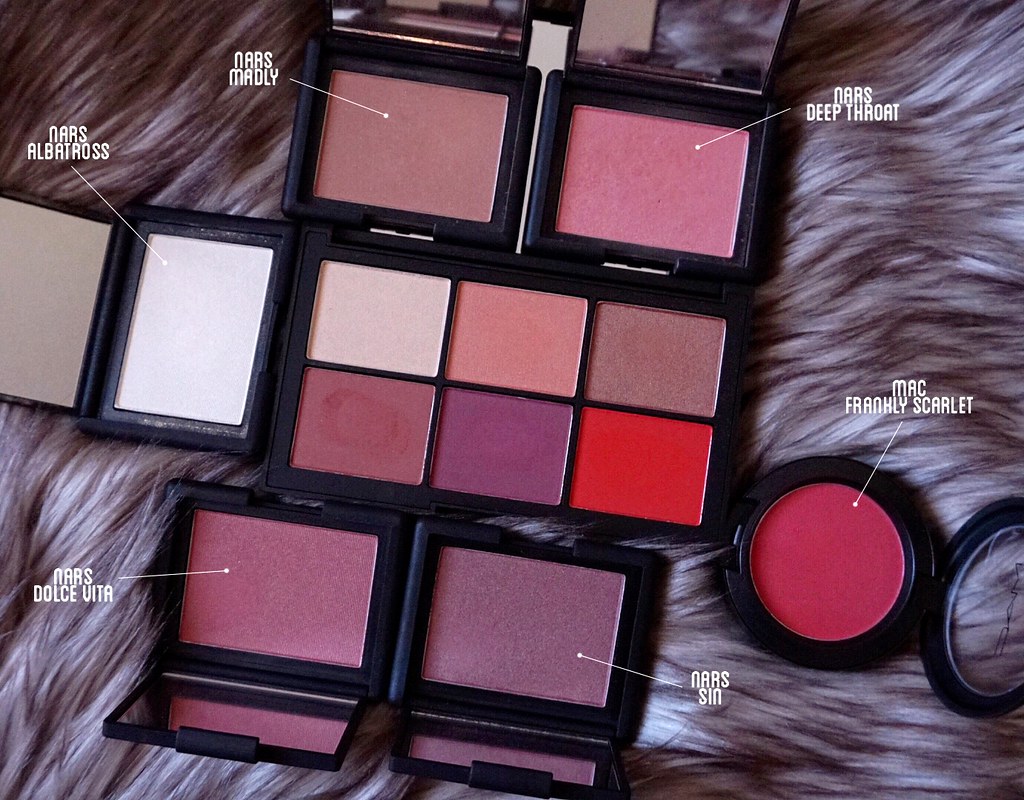 I was very surprised to see that I actually didn’t have as many dupes for these shades as I thought I would.

I thought ‘Me First’ would have been more similar to ‘Deep Throat’, however it is clear that ‘Me First’ is much more peachy. ‘Madly’ is more muted and is not nearly as shimmery.

I didn’t have any exact dupes for ‘Takeover’, however as I mentioned previously, it reminds me of a deeper version of MAC Warm Soul (original version).

For ‘Out There’ and ‘Chic’, the closest shades in my collection were ‘Dolce Vita’ and ‘Sin’, however these blushes have shimmer in them.

Lastly, I thought ‘Exhibit A’ would be more similar to ‘Frankly Scarlet’ by MAC, however ‘Exhibit A’ is so much more vibrant and warm in comparison. However, I think that they both have equal pigmentation and similar textures.

I’m glad I picked up the NARS Unfiltered I palette. The shades are quite different, and I’m happy that I couldn’t really find many dupes in my collection. I much prefer the mattes in the palette over the shimmers in terms of the formula, however as a whole, the quality of the blushes in the palette are on par with the original NARS blushes from the permanent line.

I think if you’re someone who doesn’t really have many blushes to begin with but would like more of a variety in terms of shade selection and formula, and you’re looking to upgrade your collection by purchasing something more mid-range, this palette would be a great introduction to the world of NARS blushes. The quality isn’t compromised and the shades are different enough from each other that you wouldn’t get bored too easily and feel tempted to buy more, unless you’re a blush addict like me. The only downside is that if you really fall in love with a shade other than Exhibit A, you’re basically S.O.L. because they’re limited edition shades. If it’s any consolation, NARS blushes take forever to finish.

Would I recommend this palette? Yes. I think it’s one of the better cheek palettes that NARS has released because of the lovely shade combinations and uncompromised quality, which is typically expected in limited edition palettes.

Have you tried any NARS blushes?

If you have, which one is your favourite?