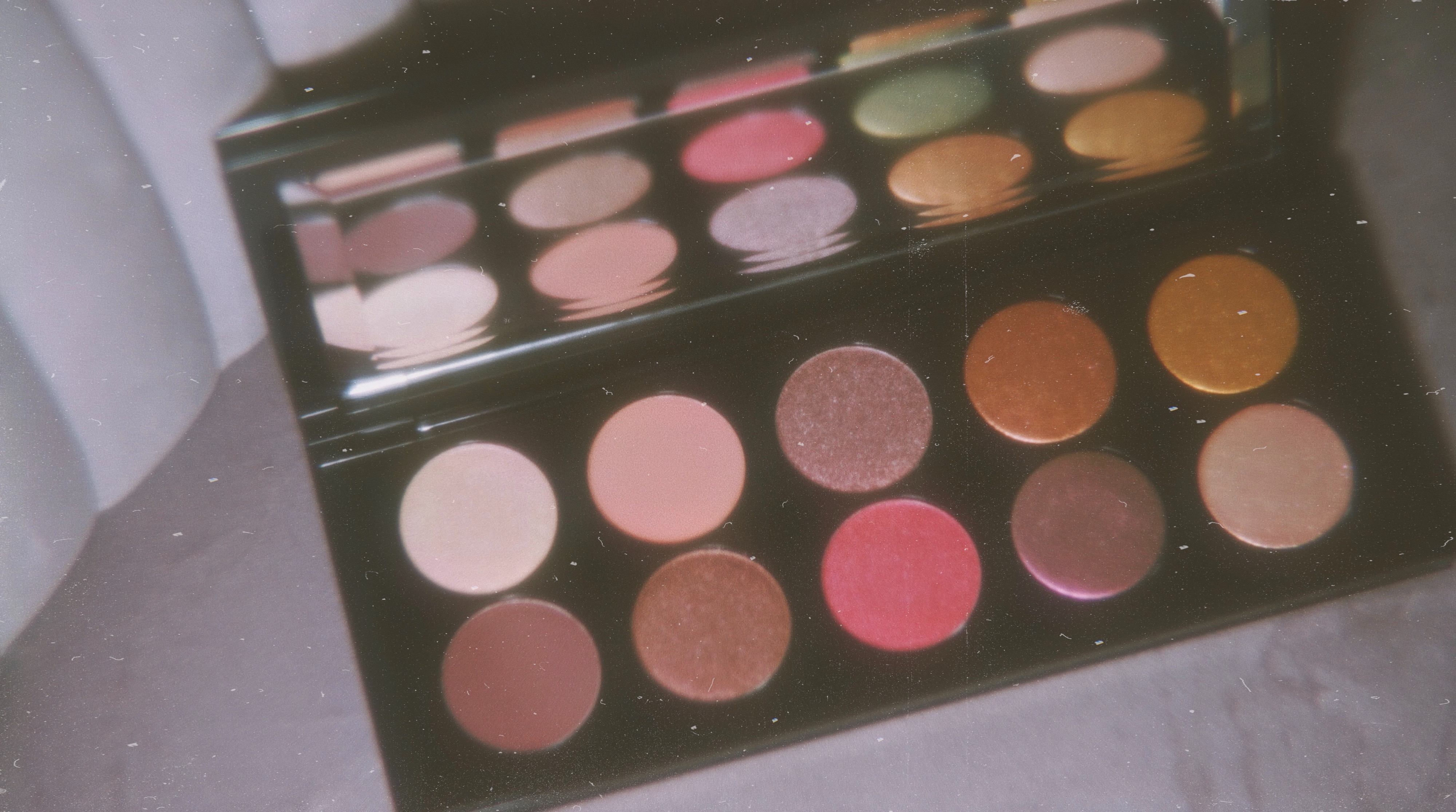 Keeping the Pat McGrath train going here on Girl & Vanity, today I wanted to share some thoughts and swatches of the new (I think?? maybe NEW-ISH) Mothership VIII palette in ‘Divine Rose II’. Before I purchased this one, I already had the Mothership V palette in ‘Bronze Seduction’, which is of a similar warm, glittery vibe. I’ll admit, my interest for the Divine Rose II palette was lukewarm at first. But then came the onslaught of all the glittery and sparkly swatches from YouTube and Instagram! I don’t know what it is about Pretty Shiny Things™ that triggers my lizard brain, all I know is that it is what has brought us here today. So, did the power of social media and the almighty hype machine deliver? Read on to see for yourself!

The Pat McGrath Mothership VIII: Divine Rose II Palette currently retails for a whopping $175 CAD. For me, this makes it one of the most expensive palettes in my collection. It comes with 10 shades, which are described by Mother herself as:

Reminiscent of the other Mothership palettes, it comes in a beautifully designed cardboard box with the actual palette being a sleek, luxurious black case. One thing to note, my cardboard box arrived damaged (ordered directly from Pat McGrath’s website), which is something to be aware if in case you’re a serious collector. This was a complaint I read about often for this particular palette.

There are 2 mattes in the palette: Naked Blush, described as a ‘mid-tone coral’ and Xtreme Burgundy, a ‘deepened burgundy’. Naked Blush is very pigmented and applies smoothly, however it produces significant kick-up when swatching or when dipping a brush into the pan. Xtreme Burgundy is also relatively pigmented, but not as smooth as Naked Blush.

The shimmers in the palette are: Skinshow Rose Opal, an ‘incandescent champagne with an opalescent shift’, Divine Dusk, a ‘luminous rose bronze’, and Rose Seduction, a ‘vivid magenta satin’. The shimmers in the palette are pretty, smooth, and moderately pigmented. However, out of all the shadows in the palette, these ones are the most ‘ordinary’ to me. These shadows don’t really stand out to me and I think they are the most ‘dupeable’ in terms of shade and finish. It could just be that I personally think that shimmery shadows are fairly generic and usually a dime a dozen.

The glitter and metallic shadows are: Eleganza, a ‘chromatic plum pink’, Bronze Rosé 005, a ‘metallic copper rose’, Gold Lust 001, a ‘glistening antiqued gold’, and Astral Pink Moon, a ‘glittering peach champagne’. These shadows are some of my favourites in the palette. All of them feel like cream shadows. They stick to the lid fairly well and glide on smoothly. Some level of fall-out is expected with glittery shadows, but these ones aren’t too bad. They aren’t crumbly and they don’t feel chunky when applying them to the lid. Although they are fairly intense, especially Eleganza, it’s easy to control the level you want with these shadows. Astral Pink Moon is the only one without a coloured base, but I like using it as a topper as it is perfect for that “wet”, glossy look.

Finally, VR Sextraterrestrial, described as a ‘fuschia, golden peach and chartreuse triochrome’, is the first of the newest finish in the world of Pat McGrath eyeshadows. For this reason, the shadow is the pièce de résistance of the palette. Unfortunately for me, I don’t think I’m a fan! I can see the appeal for photos since it looks really cool in the pan and produces interesting swatches under different lighting, but on the lids in normal lighting, it ends up looking grey on me. The chartreuse tone doesn’t really show well on my lids, but when the light hits in certain angles, the fuschia or the golden peach can be detected. Maybe my opinion on this shadow will change the more I use it, but as of right now I’m a bit disappointed in it.

I tried something different here and swatched all the shadows on bare lids (i.e. no primer, no concealer, just clean skin). I’ll admit it’s not the cleanest of applications, but I thought it would be nice to show what the shadows look like on the eyes where they belong! I think the shadows showed up well and applied really nicely.

I really like this palette. I love using glittery and shimmery shadows whenever I feel like applying anything other than liner on my eyes, and I think that this palette provides exactly what I like to use. I like how they deliver the intensity of a cream shadow without the fallout of normal powder shadows. The shadows are easy to use, they show up the way they look in the pan, and can really make your eyes pop effortlessly. I think the shadows in the Divine Rose II palette are more versatile than I initially thought and can be used more casually since the shades aren’t too “out there”, but are still very unique and beautiful.